BTS held a pair of concerts at Ecopa Stadium in Shizuoka on July 13th and 14th.  This was their last destination in Japan for the “Love Yourself: Speak Yourself” Tour. I traveled from Tokyo to join the one on the 14th. 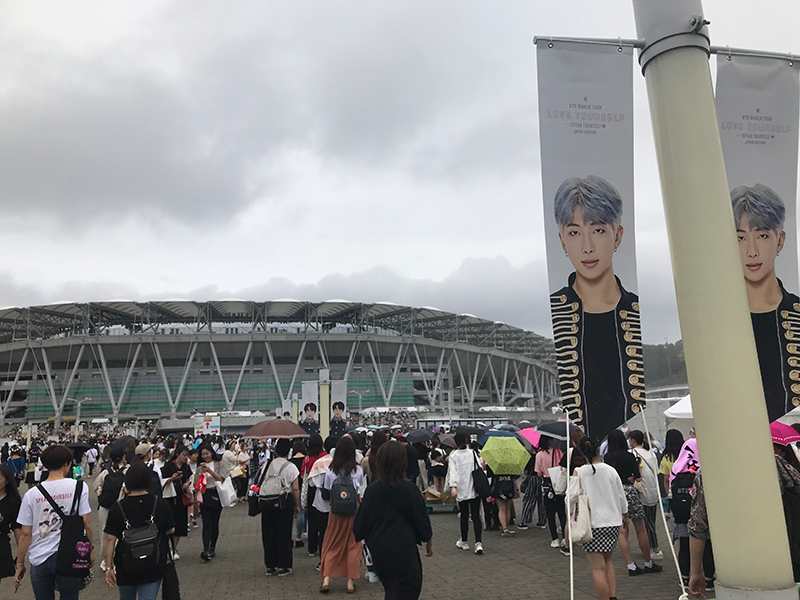 This was my first time going to a BTS concert. I had thought I knew what I was expecting, only to be proven wrong.

I left my house at 10 am, 6 hours before the concert with a bag packed for a one night stay. As soon as I reached Kakegawa station, the closest station to the stadium, I realized for the first time how so many ARMYs—the nickname of BTS’ fans—were on the same train. It was only 1 pm, three hours before the concert, but the platform was filled as everyone headed towards the exit.

Kakegawa Station was rather small for quite a crowd. Inside the station, there were already some noticeable banners for the BTS concert as well as station staffs leading the way to the stadium. I got on a local bus that was exclusively chartered for carrying the crowd to the Ecopa stadium.  As I rode, it went deeper and deeper into the mountainous area. 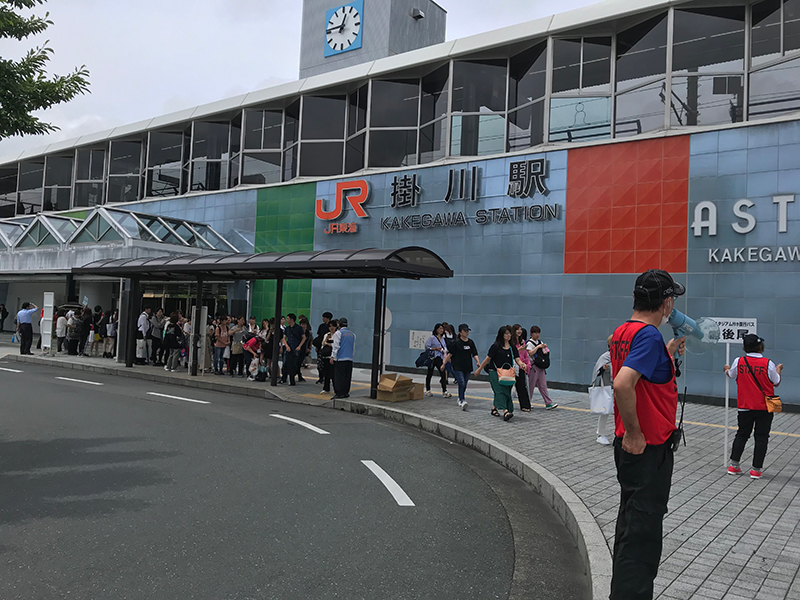 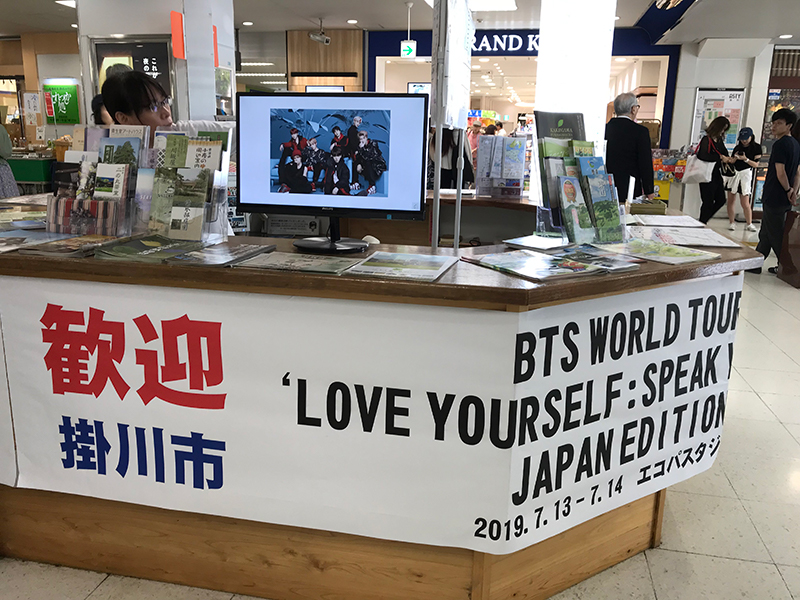 As the bus was nearing the stadium, everyone stared in awe through the window. The stadium was huge despite it being in the middle of the mountains. However, I was more surprised by the mountain of ARMYs. Huge waves of ARMYs were coming from every direction you could face. It looked like they were making a long line that was at least 2 kilometers long. Guess what? That was the line for the merchandise. 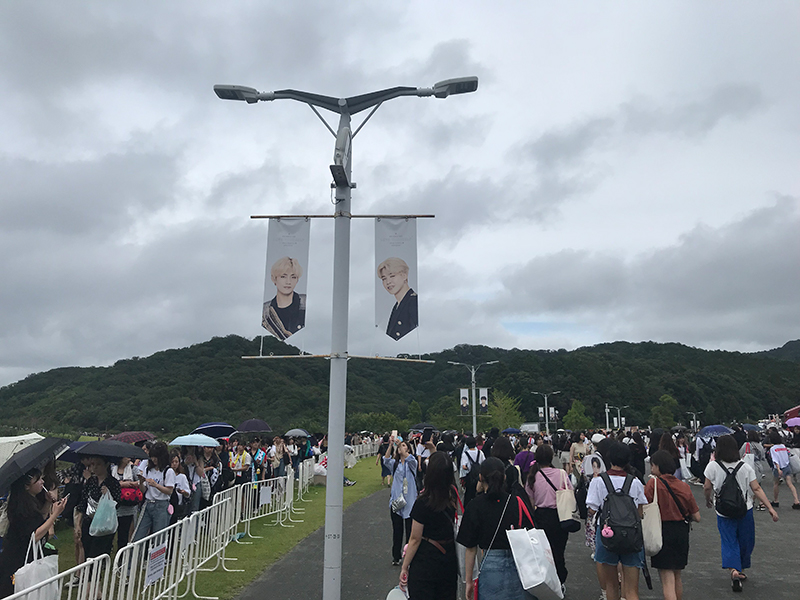 When I stepped out of the bus, I headed straight to the merchandise line. I was hoping to buy a t-shirt. By the time I got to the back of the line, I was surrounded by trees. From a distance, I could barely hear the pre-concert music that was playing around the stadium accompanied by the crowd around the food stands. I waited in line for one hour, until a staff announced that all the merchandise has been sold out.  Everyone was asked to leave the line. I would have needed another hour to get to the front of the line. 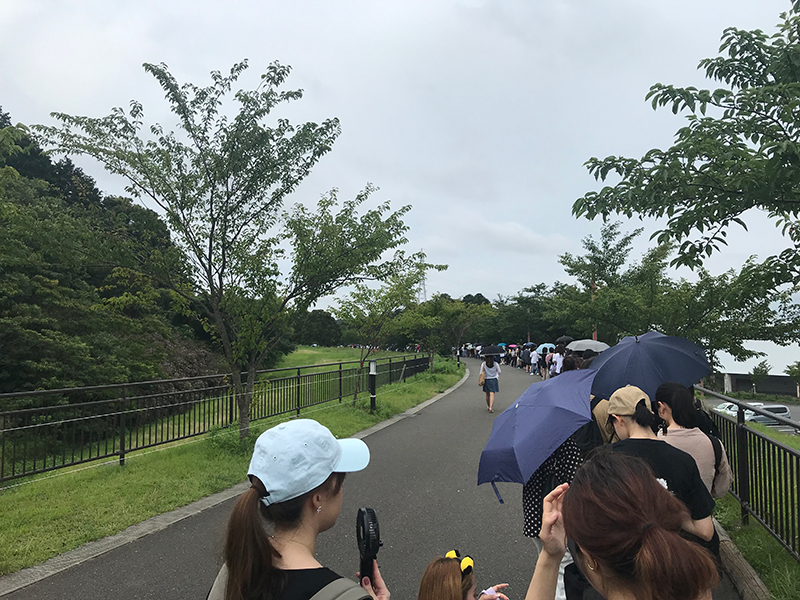 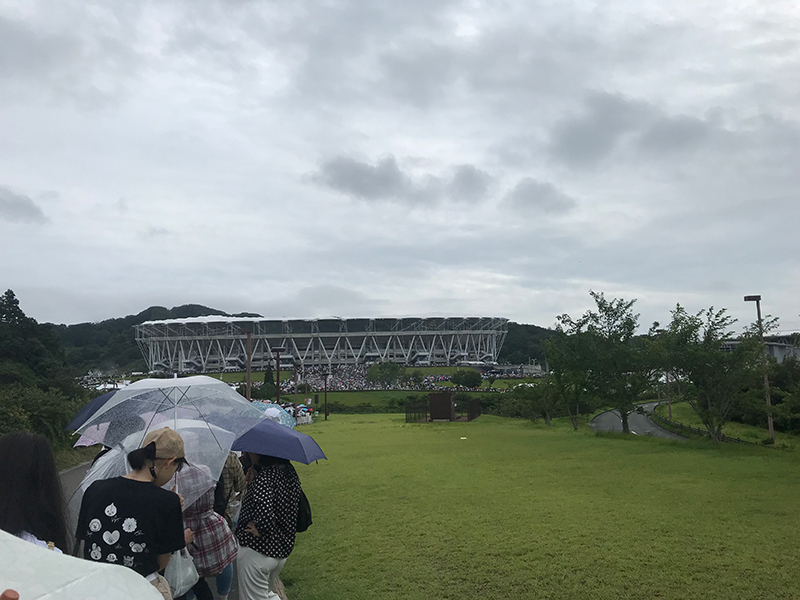 What made me more disappointed was when I found my seat. It was a “Tenjo Seki”, which translates to “Ceiling Seat”, and my seat was just two rows from the very back. Yes, I was closer to the ceiling than BTS. As the seats filled up in the stadium, some music videos started to play on the big screens. Five minutes before the opening act, ARMYs raised their ARMY bombs–BTS’s official lightstick connected with Bluetooth—to chant along to “Mic Drop”, “Fake Love”, and “Idol”, our voices raising the volume as we anticipated for the opening act. As soon as BTS finally entered the stage for “Dionysus”, the roar of the crowd must have easily be heard miles away.

The songs that BTS performed included multiple hits like “Fake Love” and “Idol” and many from the most recent EP like “Make it Right”, and “Boy with Luv”. They also performed solo stages for each member having different auras with from their diverse personas.

Their stage presence matched with the vibe of the songs: “FIRE” had the members in a hyper mode with real fireballs coming out of the stage, while members were smiling and holding out the mic and were wrapped in the chorus of ARMYs singing during “Wings”. The rap line was spitting fire for “Outro: Tear”, and the vocal line got emotional for “The Truth Untold”. During the encore with “Anpanman”, they came out of the stage with a light, playful feeling surrounded by a ballooned playground.

It was impossible to sit and listen patiently. Even I was standing up and waving my ARMY bomb cheering for BTS in each song. When the members had the chance to speak in between performances, they shouted “ARMYYY!” and we would reply with jumbled screaming. During their stages, my eyes were mostly glued on the big screens since BTS looked like dots on the stage but it was a different feeling knowing that BTS was right there, meters away. 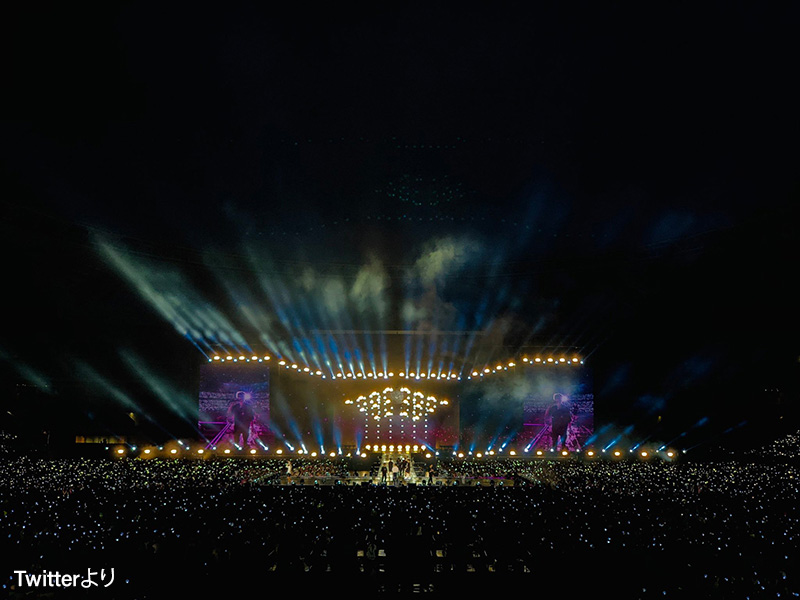 The most surprising moment came when BTS was offstage taking breaks to prepare for the next song. Since there were many instances where confetti was shot in the air, as soon as a VCR started, ARMYs in the standing area would sprint to take a piece of the confetti. Other ARMYs would race to the bathroom so that they wouldn’t miss whatever came next. This scene was so chaotic that I could barely focus on the VCRs.

It was raining that day, so the fans seated in the unroofed front seats needed raincoats. Nevertheless, BTS had huge sprays of water coming from both the equipment on stage and their water bottles, so raincoats would have been handy even on a sunny day.

My favorite was their last song, “Mikrokosmos”, where BTS took their time to wave to the crowd and express their appreciation. They rode carts that were rolled all around the stadium, just a touch away from ARMY’s stretched-out arms. ARMYs raised up both their iPhone flashlights and ARMY bombs that were lit white. Although the sun had set, the lights illuminated the stadium as if they were stars. That view was so stunning that, for a moment, it made me forget that I was seated just a touch away from the ceiling.

People seated far away from the stage had nothing to worry about since BTS’s presence and ARMY’s fan chants filled the stadium top to bottom. Another plus side of sitting at the top row, far away from the stage, was that it was roofed to avoid the rain. Fans there could also cheer for the next performance earlier than others because from their seats the band members waiting under the stage for standby were visible.

From this experience, not only was I able to see BTS perform some of my favorite songs, but I could feel first-hand the hype—how many fans sacrifice their time, money, and effort to see them. BTS is a very popular k-pop group, probably the most famous worldwide at the moment. However, you never get to actually feel their popularity if you see them through a screen and not with your naked eyes. You realize that scores of people want to experience the same excitement of seeing them onstage.

The view from the stage of all this must have been surreal.  But every one of the BTS members was able to show a very satisfactory performance; it was as if their music was their energy. They spoke Japanese to the best of their ability while ARMYs responded with laughter, and cheered them on. “Thank you for the past 2 days. It means a lot to us that ARMYs came from far away in the rain. It’s the reason why we love to see you guys,” said Jimin. As BTS said their final words while seeing the last glimpse of our faces, fireworks blasted in the starry night sky for a perfect grand finale of the tour. 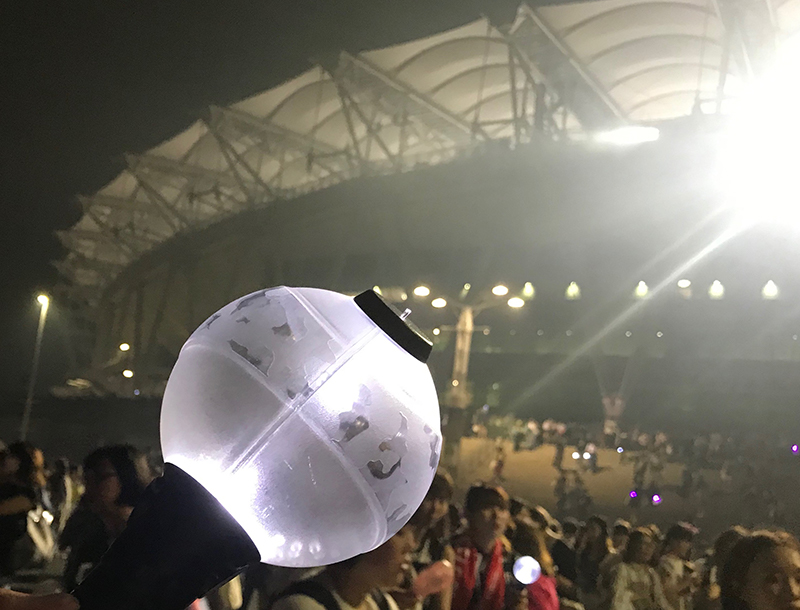