PRODUCE 101 JAPAN SEASON 2 has finished filming despite the ongoing global Coronavirus pandemic. PRODUCE 101 JAPAN is a survival audition show and a spin-off of PRODUCE 101 from South Korea. In the program,101 male trainees from around the country gather to go through multiple stages to debut as a permanent 11 member group. Their survival entirely depends on the votes of the viewers, also known as kokumin producer or “national producers.” During its first season that aired in 2019, the final 11 members debuted as JO1.

PRODUCE 101 JAPAN SEASON 2’s theme was “Let Me Fly,” in hopes of turning trainees’ dreams into wings and letting them fly off into the world as a boy group. The episodes were shown on GYAO! every week starting April 8th, 2021, and ended on June 13th, 2021. The 11 members were finalized as Sano Yudai, Ikezaki Rihito, Xu Fengfan, Matsuda Jin, Nishi Hiroto, Ozaki Takumi, Fujimaki Kyosuke, Tajima Shogo, Takatsuka Hiromu, Kimura Masaya, and Goto Takeru. They formed the group INI (I In I), meaning the 11 of us that we met through PRODUCE 101 JAPAN SEASON 2 (I) are networked (N) with you (I).

In their journey in PRODUCE 101 SEASON 2, there were a few changes compared to the first season.

Again, the comic duo, NINETY-NINE, which consists of Okamura Takashi and Yabe Hiroyuki, was hosting the show. However, the trainers were a little different. Aoyama Thelma and Sugai Hidenori were in charge of vocals. The rap trainer was DA PUMP’s KENZO, and the dance trainers were KEN THE 390 and Nakasone Rino.

There was also a new voting system with the effects of the Coronavirus pandemic. Before the first episode, the national producers watched videos of the trainees posted on YouTube by the Official PRODUCE 101 JAPAN account. They voted for the trainees they wished to see on the television program. There were four different types of videos: a self-introduction, an interview, a dance performance of season 1’s theme song (“TSUKAME ~It’s Coming~”), and a rapping or singing performance of a song of their choice. This new system was called (ON:TACT), coming from the idea that viewers cannot directly meet the trainees (UNTACT) but wish to have a close connection with them through online platforms (ON). After the voting period, the performance video of this season’s theme song, “LET ME FLY ~Sono Mirai e~” revealed the chosen 60 trainees, which premiered on YouTube on March 30th, 2021. Other than this, the flow of the survival show was almost identical to season 1 and the original South Korean PRODUCE 101. 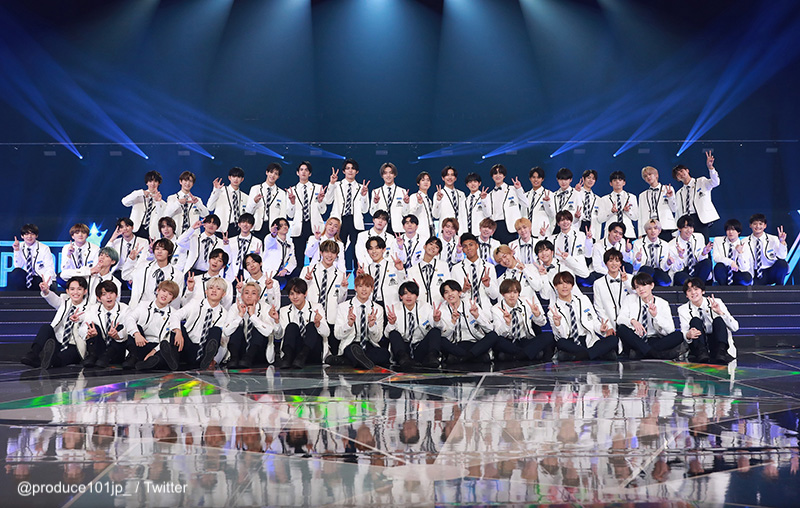 The 60 trainees chosen to participate in the television program

INI will be focused not only in Japan but abroad as a global group. This came from the idea that music is something that anyone can enjoy regardless of nationality or language.

INI will be debuting later in 2021 and will be vital to becoming the next pop sensation!

Who is JO1? A Guide to Knowing the Popular Japanese Boy Band [英文記事]